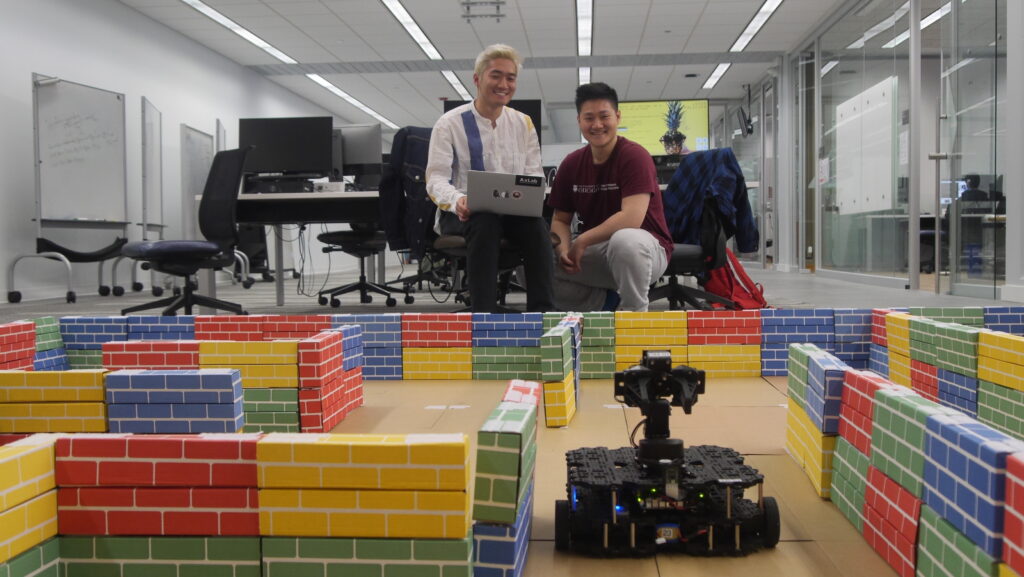 When Assistant Professor Sarah Sebo was an undergraduate, a self-directed course on artificial intelligence and self-driving vehicles changed the track of her future career. After learning about the algorithms that help cars navigate and find the most efficient routes, Sebo built a small robot to apply her new knowledge, watching with wonder as it found its way through a maze.

Now, she’s brought that experience to the UChicago CS, where this spring she taught the first in-person edition of Introduction to Robotics, a new course for the department. Using space in the Computer Science Instructional Laboratory (CSIL) on the first floor of the John Crerar Library, Sebo’s students experimented with programming devices to run races, play games, and perform other novel tasks.

“Being able to see the code that you were writing work on a physical robot was really inspiring for me,” Sebo said. “I wanted to recreate some of that experience in this class, where students would come in who may have never programmed a robot before, learn about key robotics algorithms, and then see it come to life themselves on a real robot.”

After two quarters of teaching the course remotely due to COVID, Sebo was finally able to realize her complete, hands-on vision this spring. Each Thursday, students gathered in the remodeled CSIL5 classroom, tinkering with TurtleBot robots purchased through a grant from the College Curricular Innovation Fund and assembled by Sebo’s Human-Robot Interaction (HRI) Lab. Student teams programmed their robots in Python using ROS (the open-source Robot Operating System) to complete assigned tasks, such as locating and picking up a cylinder or moving through a maze of cardboard blocks set up outside the classroom. 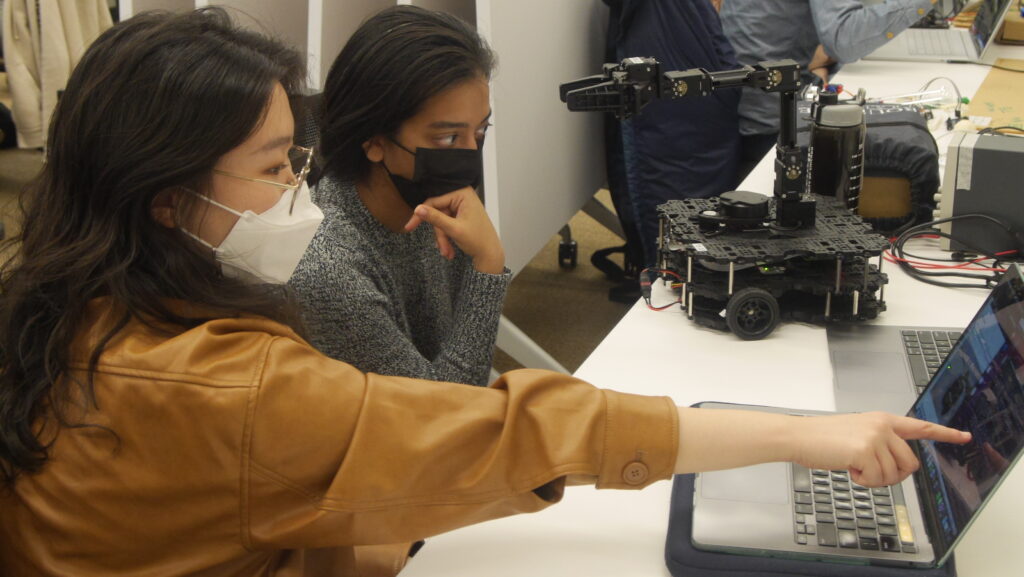 “The TurtleBot platform itself is relatively low cost,” Sebo said. “It does a lot of the basic robot functions: it can move forward and backwards, it can turn, and it has a RGB camera and a LIDAR sensor, which gives the robot 360-degree distance information. Then it also has the attachment of this five degree of freedom arm, so it can pick up items and manipulate its environment in other ways.”

At the end of the quarter, the students presented project demos that applied advanced algorithms to perform playful abilities. In the Robo Forger project, designed by Samir Rajani, Rory Butler, Alex Miller, and Nick Auen, the robot is fed an image, such as a maple leaf, and then asked to draw that image on a white board.

Other projects used their robot to sort different types of trash into different bins, match wits with a human opponent in a game of tic-tac-toe, run a baton-passing relay race through a maze, or identify and “slap” balloons wearing Chris Rock’s photograph (it’s an Oscar joke). Though the demos were humorous, the programming was very serious, involving advanced concepts such as computer vision, reinforcement learning, object tracking and other algorithms. Despite some quirky challenges – the tic-tac-toe robot liked to make “extra spins” on its way to the board, the balloon-popping robot would only recognize Chris Rock if other balloons displayed photos of Jada Pinkett Smith – the demos made working with code tangible.

Sebo said that takeaway resonated with the goal of the course, and hopes that the class will inspire students to do more with robots, just as her own undergraduate experience did.

“I think that the students really enjoyed the hands-on aspect of the class and being able to work with the robots, learn about the algorithms, actually implement them and take their learning to the next step,” Sebo said. “It’s one thing to cognitively understand the algorithm, but it’s a whole other thing to actually implement it yourself on a real system. So I think they enjoyed the opportunity to put those algorithms into action.”