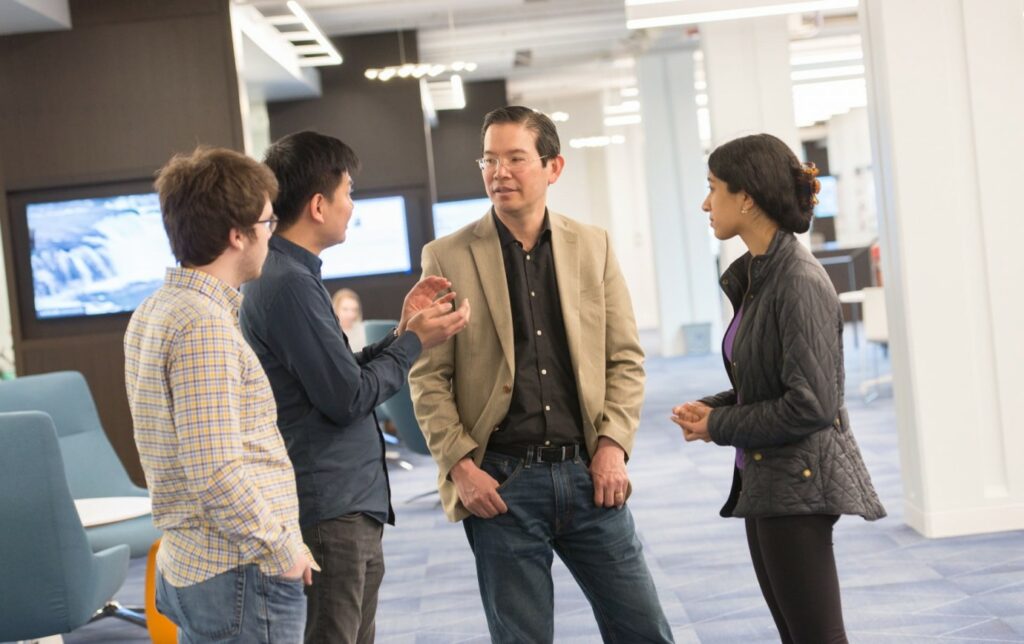 As quantum information technology becomes an emerging world focus, the University of Chicago is helping to lead the United States in its efforts to forge the future of these industries. President Biden recently announced that Fred Chong, Seymour Goodman Professor in the Department of Computer Science, would be reappointed as a member of the National Quantum Initiative Advisory Committee.

The National Quantum Initiative (NQI), created by legislation passed in 2018, is a federal government program to ensure continued U.S. leadership in quantum information science, including potentially revolutionary technologies such as quantum computers, quantum networks, and quantum sensors. In May 2022, an executive order signed by President Biden elevated the NQI advisory committee to directly advise the President on these new scientific advances and their applications. Currently, there are fifteen appointed experts in different areas of quantum information technology that make up the committee.

Chong was first appointed to the inaugural committee in 2020. During his time as a member, Chong has continued to think critically about using quantum technology to society’s advantage.

“My goal is to help the NQI think about how to develop a scientific discipline and workforce for designing practical systems with quantum technologies,” Chong stated. “I hope to work with my distinguished fellow members to bridge the many areas of science necessary to realize quantum advantage to solve societally-relevant problems.”

Chong is the Chief Scientist for Quantum Software at Infleqtion, a global quantum technology company. In 2020, he co-founded Super.tech, a quantum software company, which was acquired by Infleqtion in 2022. He is also Lead Principal Investigator for the EPiQC Project (Enabling Practical-scale Quantum Computing), an NSF Expedition in Computing. He is a Fellow of the IEEE and a recipient of the NSF CAREER award, the Intel Outstanding Researcher Award, and 13 best technical paper awards.

The NQI appointment is one Dr. Chong holds in high regard.

“I am honored to serve our country in advising the important investments of the national quantum initiative,” he said. “I am particularly interested in representing a computer scientist’s view of quantum information systems, connecting applications to quantum technologies.”