Behavior and cognition are driven by the coordinated activity of populations of neurons in the brain. A major challenge in systems neuroscience is to infer the computational principles underlying the activity of these neural populations. What are the algorithms implemented by neural populations? How can we design experiments and analyses with hypotheses about computation in mind? My research is aimed at developing the theory, modeling, and machine learning techniques needed to realize this vision of reverse engineering computation in the brain. Progress in this research could lead to new treatments for neurological injuries and disorders, new paradigms for optimizing our behavior and cognition, and new approaches to generating artificial intelligence.

In this talk, I will present lines of previous, ongoing, and proposed research that highlight the potential of this vision. First, I will present a line of brain-computer interface experiments and modeling that revealed principles guiding neural populations as they reorganize during learning. Here, we discovered constraints faced by neural populations, which predicted empirically observed limitations to behavioral improvement with learning. Second, I will present a framework of recurrent neural network (RNN) modeling for identifying the computations performed by a population of recorded neurons. Here, we train RNN-based sequential variational autoencoders to recapitulate single-trial neural population activity, and then we decompose the RNN into a collection of interpretable dynamical motifs that reveal the computation performed by the neural population. Finally, I will propose future plans for leveraging these tools and insights toward i) dissecting the interplay between attention and decision making, ii) optimizing stimulation of neural population dynamics, and iii) accelerating learning in the brain. 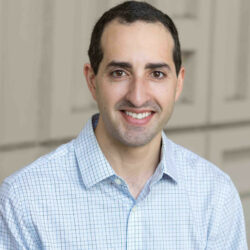 Matthew Golub is a Postdoctoral Fellow in Electrical Engineering at Stanford University. His research interests are at the intersection of machine learning, neuroengineering, and basic systems neuroscience. His current projects focus on interpreting nonlinear dynamical systems models of neural population activity underlying decision making processes in the brain. This work has been recognized by a Pathway to Independence Award from the National Institutes of Health. Previously, Matthew received his PhD in Electrical and Computer Engineering (ECE) from Carnegie Mellon University, where he developed brain-computer interfaces as a scientific paradigm for investigating the neural bases of learning and feedback motor control. His thesis was recognized by the ECE Department’s Best Thesis Award.