Pedro Lopes, an assistant professor in the UChicago Department of Computer Science, received the prestigious Sloan Research Fellowship, awarded to early-career scholars with the potential to make substantial contributions to their fields. 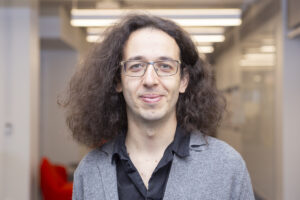 Lopes, who joined the department in 2019, was one of five UChicago faculty in economics, statistics, and the sciences to receive the honor this year. Each winner receives two-year fellowships in the amount of $75,000 to further their innovative research.

Lopes designs, builds and studies interactive devices that “borrow” parts of the user’s body to influence their motion and perception. These wearable technologies use electrical muscle stimulation to actuate movement or simulate touch feedback, or engage with the user’s sense of smell, temperature and other stimuli to create more realistic virtual environments.

“My idea is not to add more electronics that externally induce sensations, such as warming the skin with a heating pad or pushing the hand with an exoskeleton, but to add only the minimum components needed to trick the user’s biology into internally inducing the sensation,” Lopes said.

Watch video of Pedro talking about his research and the award on Fox Chicago.

With his Human-Computer Integration Lab, Lopes has invented devices that help users operate an unfamiliar tool, draw a complicated data plot, or take a photograph of a fast-moving object. With UChicago CS students and collaborators, Lopes has also invented devices for making virtual reality or other “out of body” sensory experiences more realistic, using chemicals to produce illusions of temperature, wearable devices that simulate the grasp of small children, and technologies that change the perception of an object’s softness.

Last year, Lopes received the NSF CAREER award to pursue his vision of human-computer integration, including research on how devices that take control of a person’s body or senses interact with the users’ sense of agency, as well as education and outreach activities. In designing hands-on experiences with students who may not have any prior computer science experience, Lopes hopes to offer new doorways that expand participation in the field — a second route by which his devices can increase human potential.

“It’s using human-computer interaction to produce a good first interaction with computer science,” Lopes said. “Many people’s introduction to computer science is through learning about abstract algorithms or programming and while that may work for many, it might not reach everyone. So, what if you would use tangible physical devices and user interfaces in general to motivate someone’s interest? That’s my goal.”

Lopes’ work has been presented and awarded at top-tier conferences (ACM CHI & UIST) and demonstrated at venues such as SIGGRAPH and IEEE Haptics. As part of his research, Pedro exhibited at Ars Electronica 2017, Science Gallery Dublin and World Economic Forum in San Francisco. His work also captured the interest of media, such as MIT Technology Review, NBC, Discovery Channel, NewScientist or Wired. In his spare time, Lopes creates music as an experimental turntablist and sound artist.

Asst. Prof. Blase Ur Discusses the “Metaverse” on Chicago Tonight