In the post-pandemic era, video conferencing apps (VCAs) have converted previously private spaces — bedrooms, living rooms, and kitchens — into semi-public extensions of the office. And for the most part, users have accepted these apps in their personal space, without much thought about the permission models that govern the use of their personal data during meetings. While access to a device’s video camera is carefully controlled, little has been done to ensure the same level of privacy for accessing the microphone. In this work, we ask the question: what happens to the microphone data when a user clicks the mute button in a VCA? We first conduct a user study to analyze users’ understanding of the permission model of the mute button. Then, using runtime binary analysis tools, we trace raw audio in many popular VCAs as it traverses the app from the audio driver to the network. We find fragmented policies for dealing with microphone data among VCAs — some continuously monitor the microphone input during mute, and others do so periodically. One app transmits statistics of the audio to its telemetry servers while the app is muted. Using network traffic that we intercept en route to the telemetry server, we implement a proof-of-concept background activity classifier and demonstrate the feasibility of inferring the ongoing background activity during a meeting — cooking, cleaning, typing, etc. We achieved 81.9% macro accuracy on identifying six common background activities using intercepted outgoing telemetry packets when a user is muted. 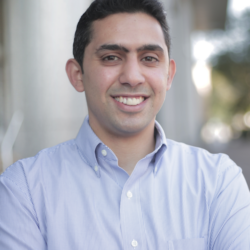 Kassem Fawaz is an Assistant Professor in the Electrical and Computer Engineering department at the University of Wisconsin–Madison. He earned his Ph.D. in Computer Science and Engineering from the University of Michigan. His research interests include the security and privacy of the interactions between users and connected systems. He was awarded the Caspar Bowden Award for Outstanding Research in Privacy Enhancing Technologies in 2019. He also received the National Science Foundation CAREER award in 2020, Google Android Security and PrIvacy REsearch (ASPIRE) award in 2021, and Facebook Research Award in 2021. His research is funded by the National Science Foundation, Federal Highway Administration, and the Defense Advanced Research Projects. His work on privacy has been featured in several media outlets, such as the BBC, Wired, the Wall Street Journal, the New Scientist, and ComputerWorld.