Our main applications include tight mixing time bounds for Glauber dynamics on Ising models whose interaction matrix has eigenspectrum lying within an interval of length smaller than 1, and for a variation of the Glauber dynamics to sample from the hardcore model on general graphs.up to the tree-uniqueness threshold. These results give a quadratic improvement over previously best bounds on the mixing time of these random walks.

Based on joint work with Nima Anari, Vishesh Jain, Frederic Koehler, and Huy Tuan Pham. To appear at STOC 2022. 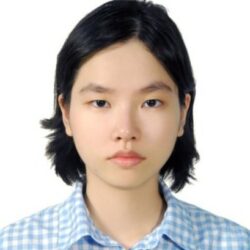 Thuy-Duong “June” Vuong is a third year PhD student at Stanford University, working with Nima Anari and Moses Charikar. She works on geometry of polynomials, with applications in sampling and optimization algorithms over combinatorial domain.