Engineers and computer scientists often isolate technical problems away from the human and societal context in which they exist. In this talk I will discuss problems, notable accomplishments, and research methods in the intersection of networking and people. I will draw upon my own experience working with tribal communities in the southeastern parts of the United States and rural communities in Georgia, with a focus on recent work to measure, map, and bridge digital divides that result from uneven access to the Internet. Issues of Internet access are especially salient as the Federal government prepares to spend $65B on broadband deployment as part of the 2021 Infrastructure Investment Bill and Jobs Act.

Lunch will be served at noon and the talk will begin at 12:30. To attend via Zoom, please register to receive login instructions. 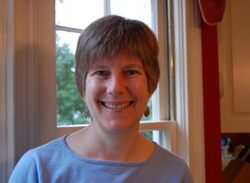 Dr. Ellen Zegura is a Regents’ Professor and Fleming Endowed Professor in the School of Computer Science at Georgia Tech. She works in two primary areas, computer networking and computing for social good. In computer networking, she is known for her work on the GT-ITM suite of Internet topology tools, which remain in use 20 years after release (2400+ citations for primary publication). In mobile wireless networking, she and colleagues invented the concept of message ferries to facilitate communications in environments where network connectivity is unreliable and/or sparse (1600+ citations for primary publication). Her work in computing and social good includes work in Liberia with the Carter Center, with Native Americans in Southern California, and with residents of the Westside of Atlanta. She has graduated 21 PhD students. At Georgia Tech, she served as Interim Dean (2002), Associate Dean (2002-2005), and first Chair of the School of Computer Science (2005-2012). She is a Fellow of the IEEE, a Fellow of the ACM, and an elected member of the Computing Research Association Board (CRA). From Fall 2014 to Spring 2021, she was on the Executive Board of the CRA, and she is immediate past Chair of the CRA Board.